All the pilgrimage routes lead to Santiago. All except the Fisterra-Muxía Road, the only route that instead of heading to this city begins in Compostela itself and continues towards the Atlantic in search of the ancient finis terrae. If you get to Santiago, only four more stages separate you from the most spectacular coastline: Costa da Morte.

The road to Fisterra-Muxia is a very attractive possibility to extend the time spent in this province, taking advantage of the magnetism of the formerly considered "end of the world" and also of the Sanctuary of Virxe da Barca. For many centuries pilgrims have shown interest in reaching this particular destination. Nowadays, the presence of the sea, the legend and mystery of these lands and the beauty of the Costa da Morte itself remain a great demand.

Given the different ways of facing it, the Fisterra-Muxía road can reach 10 municipalities of the province: Santiago de Compostela, Ames, Negreira, Santa Comba, Mazaricos, Dumbría, Cee, Corcubión, Fisterra and Muxía. The most recommendable way to follow this route (since it can be tackled in different ways) is in 4 stages: Santiago de Compostela-Negreira (21.3 km), Negreira-Olveiroa (33.2 km), Olveiroa-Fisterra ) and Fisterra-Muxía (28.8 km).

At different points of the road you will find charming places, such as the pazos of A Albariña and O Cotón (Negreira), the particular forests around the Xallas River or the small Hermitage of San Pedro Mártir (Cee). In Fisterra, there are outstanding attractions such as Camposanto do Fin da Terra, the Castelo de S. Carlos or the lighthouse itself. The indigenous social reality can be appreciated by visiting resources such as the monument to the emigrant or the fish market, where you can clearly see what takes place there. With respect to Muxia, we emphasize the weight of the cult to stone, expressed in different rituals associated with the pedra de abalar or dos cadrís. Next to them, the Virxe da Barca Sanctuary, on the other hand, forms an exceptional final colophon to the itinerary, as a popular place of worship.

At the edge of the city we find the carballeira de San Lourenzo, cozy place with centennial oaks that marks the descent toward the river Sarela.

In this route we will find the nucleus of Ponte Maceira; bridge built on the Tambre river in the 14th century and surrounded by a beautiful natural and monumental landscape, will be one of the points in which to enjoy the landscape in this way. On the other side of the bridge, we find the Capela do Carme or San Brais from the 18th.

Already in the city council of Negreira a great diversity of historical civil construction stands out. Among them we find several pazos like the one of A Chancela or of the Captain; the pazo do Cotón, a medieval fortress restored in the 17th century, and the pazo de Balandrón, modernist building dating from the mid-20th century. 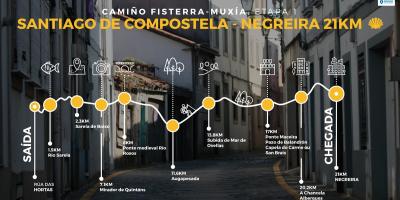 This route runs next to the A Fervenza reservoir, in the Xallas river, that later ends in a waterfall in Ézaro, producing a unique natural phenomenon that every year welcomes thousands of visitors.

In this tour we will go through the river walk of the Barcala river, in the council of Negreira, and we finish crossing the Ponte Olveira in the Town Hall of Dumbría, built in the 16th century.

In all the zone we will find numerous groups of hórreos among which the Maroñas' ones stand out, in the city council of Mazaricos. The church of Santa Baia de Dumbría from the 17th and 18th century, is one of the first monuments that we find following the way.

Already in the Town Hall of Muxía we can make a stop in San Martiño de Ozón to see one of the largest granaries in Galicia, 27 meters and with 22 pairs of feet long, and the Romanesque apse church, vestiges of the old Benedictine monastery of San Martiño.

The monastery of San Xiao de Moraime is a Romanesque temple with three naves. In its interior it keeps gothic paintings of great artistic interest that represent the seven deadly sins. A little unknown treasure that is well worth discovering.

Already in Muxia, the sanctuary of Nosa Señora da Barca, a baroque temple built in front of the beautiful sea of ​​the Costa da Morte, well known for the famous rock formations known as Pedra de Abalar or Pedra dos Cadrís, to which a large audience attends at any time of the year. 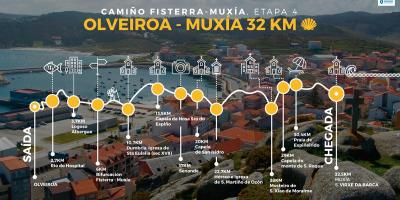 The sanctuary of Nosa Señora das Neves, from the 18th century, is located in the City Hall of Dumbría and its "holy fountain" welcomes numerous visitors throughout the year.

In the Town Hall of Cee, the pazo do Cotón, the nineteenth-century building of the Fernando Blanco Foundation and the church of the Xunqueira, with its Gothic chancel from the 16th century, are some of the tourist attractions of this villa.

In Corcubión, the church of San Marcos, characteristic building of the gothic-sailor style, keeps in its interior the polychrome image of San Marcos, with Italian origin from the 15th century. Corcubión has a charming old town center to enjoy pleasant walks.

Following the path towards Fisterra we find the cala do Talón and the Recoleta beach, the Langosteira's beach and dunes, wich offer a wild and solitary landscape. The Cruz de Baixar, from the 16th century marks the entrance into Fisterra.

Already in Fisterra, we can visit the baroque chapel of Nosa Señora, the church of Santa Maria das Areas, where the Santo Cristo de Fisterra is, a carving dating from the 14th century, and the Renaissance image of the Virxe do Carme.

As a magic endingt, we find in Cabo Fisterra the Lighthouse built in 1853. From here it is mandadory to see how the sun hides behind the waters. Leaving Fisterra towards Muxia we find the baroque church of San Martiño de Duio from the 18th century. This place has developed into a attractive tourist spot since the ruins of the disappeared Roman city of Dugium, submerged under the waters, would be hidden nearby. This city is mentioned in the Codex Calixtino as the place where the legacy of Rome lived, who it is assumed was visited by the disciples of Santiago to authorize the burial of the Apostle on the lands of Compostela.

Lead-up to Muxía, we find the Lourido beach, located in an impressive coastal environment. 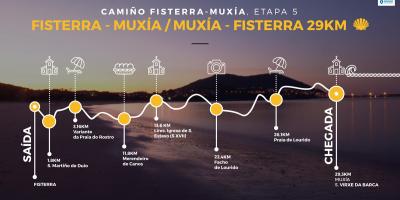