The Primitive Way is the oldest known itinerary. It can not be understood without the personality of Don Afonso II de Asturias, who according to legend visited the tomb of St. James as soon as he was aware of it, an important fact in the emergence of the city of Compostela. Don Afonso III moved the capital of the Kingdom and obviously Oviedo lost weight on the road in contrast to the newer one: Leon. Hence the French Way soon overshadowed the Primitive Way.

In the province of A Coruña the Primitive Way runs through the municipalities of Toques, Melide, Arzúa, O Pino and Santiago de Compostela, being a slightly different path from the French Way, wich it joins to in the village of Melide.

The pilgrim can taste the gastronomy of inland Galicia, for instance, the octopus in Melide and Arzúa cheese wich have great importance. They are the two major towns of the Terras do Ulla e o Tambre, and as can be seen from its name, highlighted by their rivers, which significantly shape the contour.

The path of the Primitive Way enters the province of A Coruña through the Serra do Careón, making the limit between the provinces of Lugo and A Coruña. It is a place with some ecological value that preserves flora and fauna almost disappeared in Galicia. The highest peak, called Careón, is 798m.

Melide is the town where Primitive Way meets the busiest French Way. In this locality you can visit the Ponte Leboreiro from the 14th century or medieval bridge from the 12th century. The churchs of San Martiño de Moldes, San Vicenzo de Vitriz, San Xoán de Furelos and the Pilgrims Hospital, now the Terra de Melide Museum, also highlight. 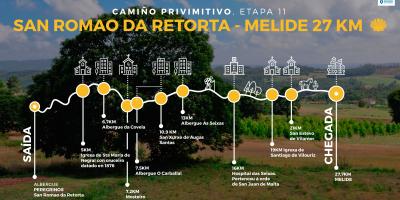 Already in Arzúa, we find the church of Santiago de Boente, and following the way we reach the Recreation Area of Ribadiso, with the pilgrims hostel that was an old medieval hospital. 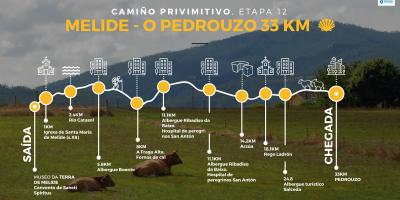 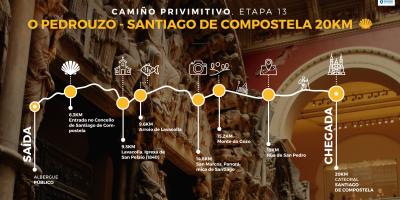