As the Kingdom of Portugal grew in weight and self-determination, the Portuguese Way acquired importance, at times of great lyrical importance of the Galician-Portuguese, precedessor of today's language that relates Galicia with Portugal in a special way. The pilgrimage of the Portuguese to the Cathedral of Santiago was very important.

The Portuguese Way crosses, in the province of A Coruña, the municipalities of Padrón, Rois, Teo, Ames and Santiago de Compostela. Padrón is a refuge of history, of patrimonial samples and, also, of poets. We can highlight specific attractions that the pilgrim can enjoy, such as the wonderful Botanical Garden, the Church of Santiago or the local peppers, under designation of origin. We can not forget the parish of Iria Flavia which has a wide historical relevance, since it was even episcopal thirst in the time of the Visigoths. Casa dos Canónigos stands out there coming from the 18th century. Already between Rois and Teo, you can enjoy the wonderful natural space that surrounds the Pazo do Faramello, place of the first paper mill in Galicia. The exceptional biodiversity highlights there, with special native and worthy specimens.

In Ames, reaching the vicinity of the Milladoiro, the pilgrim is already noticing the end of the journey by the evidence of the landscapes. Already in Santiago de Compostela itself, and without mentioning the wonders that can be seen around the Cathedral of Santiago, you can see attractions such as the Capela das Ánimas, the Monastery of San Martiño Pinario, the Monastery of San Pelaio de Antealtares, the Pazo de Fonseca, the Pazo de Raxoi, the charm of the Plaza de Abastos...

In Padron we find the old port, originally from the 12th century, where, according to tradition, the body of the Apostle came from Palestine in the first century.

The river walk of the river Sar, the church of Santiago which guarded 'O Pedron', a Roman altar dedicated to Neptune and where the stone boat would tie, the Fonte do Carme from the 18th century, the Botanical Garden, the House Museum of Rosalía de Castro are just some of the many stops that we can do in this village.

Already in the parish of Herbon, the village famous for its peppers, we can visit the Romanesque church of Santa María de Herbón

Further on, continuoing the way to Compostela, we can visit the Santuario da Escravitude from the 18th century.

We find in this path two ruins of great interest. On the one hand the legendary Castro Lupario, where the queen Lupa lived; and on the other hand the Castelo da Rocha Forte from the 15th century, destroyed during the revoltas irmandiñas. 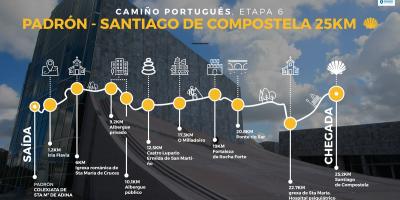