The essence of this area is explained, to a large degree, by all the meaning that the different Caminos entail. The immense artistic and monumental patrimony is outstanding and it leaves its marks throughout the whole extension of this destination. But, as we shall see, that marks do not only generate interest in the patrimonial side of this territory but also in the gastronomic and festive fields.

Definetely Santiago de Compostela, as the final destination of all the caminos in which lasts the mark of pilgrims of all times, offers to those who visit it, art, culture, beauty and history in a city recognized as World Cultural Heritage.

«It is an Ideal place for rural tourism and hiking trails». Due to its condition of interior land, the water of the rivers and springs is a very important lement in the lands of Santiago. This reality is perceived in the spectacular images that the Tambre River has in all its extension, for example in the rivers Mendo and Mandeo from its birth, Ulla, Mera, Eso, Carracedo or Boente in Arzúa; The Braga de Valga lagoon, the Mira river waterfall in Santa Comba, the Portomouro waterfall in Val do Dubra or the Anxeriz waterfall in Tordoia, among many other attractions.

Antiquity: different samples such as the dolmen of Forno dos Mouros and Castro da Graña (Toques), the dolmen of Cabaleiros, the castles of Curtis, the stone of home in Val do Dubra, the Roman Camp of Ciudadela in Sobrado or the remains Archaeological sites of Ames prove the importance of antiquity in this area.

Historical heritage: The patrimonial theme referred to above is reflected in the city of Santiago de Compostela itself, in terms of its cathedral, the Praza do Obradoiro, the City of Culture, the Monastery of San Martiño Pinario, the Pazo de Xelmirez, the Hostal dos Reis Católicos ...it is true that, in addition, in Santiago de Compostela, the usual becomes art. Thus, the mere fact of visiting its historical center or walking its cobbled streets, takes in consideration and turns out to be an experience of enormous artistic value.Moreover, in the surrounding municipalities, there are also interesting examples of historical value: the Monastery of Santa María de Sobrado, from the Renaissance and the Baroque, to which the monks grant a special figuration; the Ribadulla Bridge In Vedra, Pontevea de Teo or the Church of Páramo in Val do Dubra ... are just a few examples, distributed over the territory.

Santiago de Compostela: The cathedral, one of the most important monuments in the world, the Praza do Obradoiro, the Cidade da Cultura, the Monastery of San Martiño Pinario, the Pazo de Xelmirez, the Hostal de los Reyes Católicos and its many 'corners' in the streets of the historical area such as Rúa do Vilar or Rúa Nova will make you capture unforgettable images of a unique city.

Monastery and Lagoon of Sobrado dos Monxes: This monastery, inhabited by a community of Cistercian monks, offers lodging for those who want to enjoy a quiet and peaceful rest. Very close to the Monastery is the lagoon protected by the Natura 2000 network, which was built by the monks of the monastery in the 16th century.

Forno dos Mouros: The so-called 'Forno dos Mouros' is a dolmen dated to year 3.000 before the current era. It is located in the place of Muruxosa in the municipality of Toques. It was declared a Good of Cultural Interest in 2011 and it is a destination not to be missed for anyone interested in megalithic art.

Pontemaceira: Pontemaceira is a unique place that the pilgrims find on their way to Fisterra. Located between the town councils of Negreira and Ames, this bridge crosses the Tambre River and preserves a singular beauty and a historical artistic set of great relevance.

Queixo de Arzúa: Cheese with Protected Designation of Origin - PDO. Arzúa-Ulloa is the most produced and consumed in Galicia. The municipalities of the geographical area of PDO of the province of A Coruña are Arzúa, Boimorto, Curtis, Frades, Mesía, Ordes, Oroso, O Pino, Santiso, Sobrado, Toques, Touro, Vedra and Vilasantar.

Tarta de Santiago: This traditional tart of Galician gastronomy can be obtained in almost any establishment on the Camino. Its origin is unknown, but we know that, being the almond a scarce product in the Middle Ages, this food was a luxury reserved to few.

Melindres de Melide: These small bagels, a typical Galician product, reach its excellence in this villa of the Way of Santiago, where is celebrated every year the Festa do Melindre e da Repostería tradicional da Terra de Melide.

Aguardiente del Ulla: The aguardiente is a liquor obtained from the distillation of the remains of the grape called orujo, and it is a very common drink throughout the rural areas. In the Municipality of Vedra, in the district of San Mamede de Ribadulla, the Festa da augardente do Ulla is celebrated every year with a wide variety of activities.

Pemento de Herbón: Herbón peppers, also known as Pementos de Padrón, can be spicy and have a Protected Denomination of Origin since 2009. The origin of this product is associated with the Mexican seeds brought by the Franciscan monks to the convent of Herbon. It should be noted that Herbón's authentic peppers are only available between May and October. 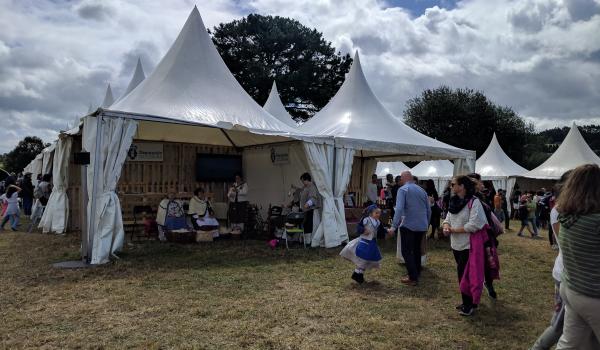