There are other roads that reach the city of Compostela from the south of the peninsula. In Roman times, Merida and Astorga were connected by a road that is known as the Via da Prata. This route was of vital importance for the Mozarabic group, since they used it as a way of escape, as well as a pilgrimage route to Santiago, thus originating the South-East Way-Via da Prata.

In patrimonial and cultural level this route counts on a tourist transcendence that goes well beyond its role as Way of Santiago. The historical origin of the Via da Prata has to do with the communication, already in Roman times, between Merida and Astorga and, therefore, between the north and the south of the peninsula. It stands as a witness of the course of the centuries. It is clear that in the time of Al Andalus this route was very important for the Mozarabic group, a Christian population that inhabited the Muslim part of the peninsula and used this route as an escape route and pilgrimage route to Santiago. Therefore, the South-East Way of St. James is formed, in its early days, by the so-called Via da Prata.Despite of that, in Zamora it is possible to take another detour to Ourense.

In the province of A Coruña, the South-East Way runs through the municipalities of Vedra, Boqueixón and Santiago de Compostela. In the first of them, you can appreciate the impressive view of Ponte Ulla. Related to the city council of Boqueixón we find the Pico Sacro, space very linked to the history of the Apostle Santiago that also turns out to be a protected natural area. The Pico Sacro offers privileged views of the area, including the Cathedral. Without it, part of the essence of the South-East Way cannot be understood. It is also an area closely linked to the history of the Traslatio of the Apostle Santiago.

Already in the destination city, before attending the permanent exhibition of art that supposes the constructions of Praza das Platerías, Praza do Obradoiro or the Cathedral of Santiago itself, the pilgrim passes through resources like the Convent of the Mercedaries (dating from the 17th century) or the Praza da Universidade (with very attractive attractions, such as the Igrexa da Compañía).

More information on The South-East Way - Via da Prata, here.

The municipality of Vedra is located in an area of ​​important pazos like the one of Santa Cruz de Rivadulla, Baroque, famous for its plantation of camellias and its forest of centuries-old olive trees. This outline is open to the public and is highly recommended.

Already in Boqueixón, the Pico Sacro of 530 m. of altitude, is undoubtedly a place loaded with mythology where you can visit the chapel of San Sebastián, originary of the 9th century and from which you can enjoy breathtaking bird's eye view.

Arriving to Compostela we find the Colexiata de Santa María do Sar, a Romanesque church that has the remains of its cloister of the 12th century, by which follows the old Roman road of the Sar, which takes us to the top of Monte Gaiás, where is the Cidade da Cultura de Galicia, a work of the architect Peter Eisenman. 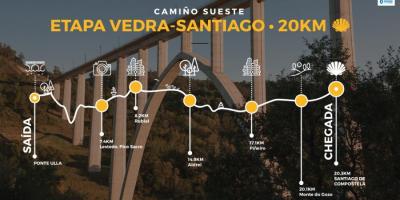