A mysterious and exuberant forest. A place of legend. A historical and literary way. The highest cliff in Europe at the foot of the sea. Unforgettable beaches. All this and much more is Ferrolterra, a geo-destination located in the north of the province conformed by the regions of Ferrolterra, Eume and Ortegal.

Ferrolterra stands out for its coastal and natural wealth. The environment that surrounds the water of its estuaries forms a spectacular presentation for this destination. History and art combine in this area, as well as the spectacular natural landscapes of the municipalities that make up this privileged environment: Ares, Cabanas, Cariño, Cedeira, Cerdido, Fene, Ferrol, Mañón, Moeche, Monfero, Mugardos, Narón, Neda, Ortigueira, As Pontes de García Rodríguez, Pontedeume, San Sadurniño, As Somozas, Valdoviño and Vilamaior.

The Estaca de Bares lighthouse, in Mañón, illuminates the northernmost cliffs of the Iberian Peninsula, the place that naturally separates the Atlantic Ocean from the waters of the Cantabrian Sea. In these lands we will find "the best bench in the world", strategically placed in the cliffs of Loiba, in Ortigueira, and also, with the permission of Santiago de Compostela, another of the pilgrimage destinations of the province, San Andrés de Teixido, in Cedeira, famous for his legend “vai de morto o que non foi de vivo" which means that anybody will visit this place once in a lifetime or once he is dead.

On the coast that joins the estuaries of these two localities, the highest cliffs of continental Europe, Serra da Capelada, rises. At its highest point, at more than 600 meters in height, the Garita de Herbeira gives us a fabulous viewpoint in which to contemplate the immensity of the Atlantic Ocean.

The characteristic winds of the Galician coast give the beaches of the province optimal conditions for surfing, highlighting Pantín, famous for the celebration of world championships of this sport. But between beaches of powerful waves, you can see the contrast with natural lagoons like those of Doniños or A Frouxeira, or artificial lakes like the one of As Pontes, an ideal place for the practice of sports like sailing or canoeing. Inland, an excursion through the impressive Fragas do Eume we will discover the Monasteries of Caaveiro and Monfero and the artistic heritage of the Andrade family.

Fragas do Eume: Protected area considered as the most important and best located coastal Atlantic forest in Europe. The river Eume, almost 100 km long, from the border between the provinces of A Coruña and Lugo until its mouth in the estuary of Ares, preserves the richest banks of the north hydrographic network. The excursions and walks along its banks are difficult to forget, as it is impressive to discover the Benedictine monastery of Galicia, the oldest in Galicia: the Monastery of Caaveiro, from which you can see an impressive view of the Fragas, or the Monastery of Monfero, with a checkered facade that will not leave you indifferent.

Ferrol: This city is linked to the naval industry, both civil and military. The rationalist quarter of the Magdalena, the Naval Museum and the seigneurial squares of Armas and Amboaxe stand out among all the places of the city. The defensive fortifications of the Castle of San Felipe and the one of the Palm rise in the entrance of the estuary welcoming the visiting person.

San Andrés de Teixido: The visits to the Chapel of San Andrés and to its pilgrimage are among the most frequent of Galicia. The legend of San Andrés along with the existence of a medieval Way make thousands of visitors come every year to this place.

Serra da Capelada: The highest cliff in continental Europe, with more than 600 meters of height, which houses impressive viewpoints such as Garita de Herbeira, where you can enjoy the immensity of the ocean and its spectacular landscape.

Ortigueira's Festival of Celtic World: Declared of Tourist Interest. It takes place by the middle of the month of July, from the year 1978 to the present day. It brings together thousands of people around diverse musical activities, folk music, traditional music and all type of related popular musical events along with other activities such as traditional sports, typical gastronomy and ethnographic workshops.

Beaches: A multitude of beaches of great beauty outstand in this privileged environment, as Pantín (famous for holding world surfing championships) or lagoons of great ecological value such as Doniños or A Frouxeira.

Turismo Slow Norte de Galicia is a pioneer project in Galicia and it started through a collaboration between Xeodestino Ferrolterra and Xeodestino Mariña Lucense with the railway company Renfe-Feve as the backbone of both destinations.

It offers the opportunity of joining a clean land, not overcrowded, with a rugged coastline and several protected natural areas… and a lifestyle that is worth recovering, a rhythm set only by your biological clock and a place where you can experience a different way to travel, to wander, enjoying every single feeling to learn, or to learn back, how to savor life in a different manner. A tourist product that offers a sustainable and conscious travel, where to interact with local culture, where to taste typical food and where to do outdoor activities in close contact with nature.

The “North of the North” is a special and magical place where the Atlantic Ocean merge together with the Cantabrian Sea, one of those Spanish corners where nature only competes with silence and legends. It is a territory where you can find secret areas of the Northern Galicia and where you can feel the calm of a timeless place and where to enjoy the hospitality of our hosts.

“Percebes from Cedeira”. Along the North Coast, from Ferrol to Bares, the quality of seafood is unquestionable. From the sound 'marraxo', even all kinds of seafood can be tasted anywhere in this territory.
The goose barnacles of this area are valued throughout the geography. This product is the protagonist of a short film selected for the Goya Awards year 2012 and directed by David Beriain that tells the story of a Cedeira goose barnacle fisherman, titled 'Percebeiros'

Neda’s Bread: The fame of the bread from Neda has its origin in the construction of the naval base in the Ría de Ferrol by Felipe II. With the aim of supplying the navy, this area that already had numerous mills since the middle Ages, became the main supplier of this product.
Every year since 1989, on the first Sunday of September, the Neda Bread Festival is celebrated on the initiative of the association of neighbors.

Octopus of Mugardos. The octopus, a product that is consumed throughout all the Galician geography, becomes in the town of Mugardos an exclusive dish for the originality of its recipe. The “polbo a mugardesa” (Mugardos-style octopus) is a peculiar form of preparation of a dish that can be tasted in all the restaurants of the area. In the park of the Constitution of Mugardos every year takes place the 'Festa do Polbo' declared as a Festival of Tourist Interest that every year welcomes a large public.

“Costrada” from Pontedeume. This exclusive product of Pontedeume has its origin in a community of Italian monks who brought this medieval product to the refectory of the Monastery of Caaveiro in the 12th century. It is a kind of salted layered pie with both meat and fish that can be tasted in any restaurant in the area.

“Chanfaina” of San Sadurniño. The chanfaina is one of the gastronomic specialties of this city council and it is elaborated with blood, meat and spices. This product, besides being the protagonist of an annual gastronomic festival is the product that gives name to the audiovisual project Chanfaina Lab, a meeting of Galician and Galician filmmakers that has become a reference experience in this sector and that tries to put in value the Rural territory through the eyes of creators of audiovisual products.

Grelos from Monfero. The grelos (turnip greens), one of the most popular products of Galician gastronomy, has special fame in this town hall of the interior of the province of A Coruña. The cold climate of the districts of the mountain of A Coruña makes this product reach less acidity and more tender. Every year, always on the Sunday before the carnival period, the gastronomic festival that honors this vegetable is celebrated in the district of Val de Xestoso (Monfero). 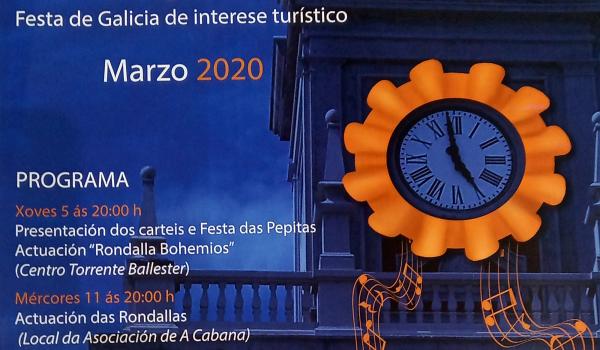 SEMANA DE LAS PEPITAS 2020
05 Mar to 14 Mar
Pepitas de Ferrol Week, festival of tourist interest in Galicia, will be held this year between March 5 and 14.