In the Middle Ages, travelers from northern Europe, especially England, landed on the A Coruña shores to start their pilgrimage. Departing from A Coruña or from Ferrol, both ways connect near Mesía in the Hospital de Bruma,and continue towards Santiago. This route is known as the English Way and is one of those that course entirely in the province. These lands are particularly noted for their cultural heritage, which we find already at the beginning of the Way. Tower of Hercules, Roman lighthouse Heritage Site located in A Coruna, was and is responsible for guiding ships crossing the Atlantic corridor. If any of these boats would enter the estuary of Ferrol, two military buildings strategically placed on both sides of the estuary controlled access: Castles of San Felipe and Palma.

The attractions that can be seen in this way are very specific, for example the castles of San Felipe in Ferrol and La Palma in Mugardos. They make a spectacular setting in combination with the Ferrol estuary. From A Coruña you can enjoy famous monuments like the Tower of Hercules, a World Heritage Site or the Castle of San Antón. Parks like San Pedro and Santa Margarita also wonderfully adorn the city. But leaving these two cities, as well as the climax representing Santiago de Compostela, in the English Way can be seen other resources of interest, including the Tower of Andrade in Pontedeume, the Church of Santa Maria in Cambre or the spectacular architecture Betanzos. In addition, the interest of this version of The Way is increased by the possibility of finding more information resources through QR codes, long itinerary.

In Ferrol we can visit the San Francisco Church from the 18th Century, the arsenal from the 18th century, designed among others by Petit de la Croix, the Hospital de la Caridad, nowadays the Torrente Ballester Cultural Center, built in 1780 to help the sick, poor and pilgrims. The Concatedral de San Xiao from the 18th Century with a Greek cross floor plan, Amboage and Armas Squares, within the historic center of the city, the Jofre Theater from 1892, icon of modernist architecture, the Castillo of San Felipe from the 16th century and numerous beaches nestled in unique natural landscapes .

In Naron, the Monastery of San Martiño de Xubia from the 8th Century and rebuilt in the 12th century under the command of Cluny.

In Neda, the Igrexa de Santa Maria from the 18th century, the ruins of the Sancti Spiritus hospital of pilgrims, the Torre do Reloxio (1786) (the Clock Tower), the porch houses in Rúa Real from 17th and 18th centurys and Igrexa de San Nicolás (St. Nicholas Church) from the 14th century. In Cabanas we find the Monastery of San Martiño do Porto from the 15th Century and, crossing the river Eume, we find the bridge built by Fernán Pérez de Andrade in the 14th century and rebuilt between 1863 and 1870, replacing the original Gothic bridge. Pontedeume historic center has a historical and artistic resources wealth. We can visit, among others, the Convent of Santo Agustino, the Capela das Virtudes, the Torreón dos Andrade who presides over the village, the town hall next to the Torre Ulloa, and already outside the town we can visit the sanctuary of San Miguel de Breamo.

Before entering Miño, we can see the medieval bridge over the river Baxoi, single arch, which is part of the bridges network built at the orders of Fernán Pérez de in the 14th Century.

The Ponte do Porco over the Lambre river brings us to the legend of Roxin Roxal , that names this place, where you can enjoy a natural space where the river mouth forms a beach with a long sandbank and calm waters.

Following the way to Betanzos, we find in Paderne the church of San Pantaleon das Viñas and in the Bentanzos Vello church San Martiño de Tiobre and the Nosa Señora do Camiño Sancturay ou Remedios Sanctuary from the 16th Century. 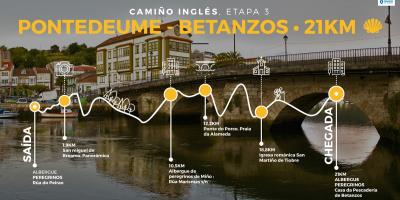 Betanzos is undoubtedly one of the villages with most historical and artistic importance in the province. Its walls and its narrow streets make this village an ideal place to enjoy pleasant walks. Numerous monuments can be visited, among others, Pazo de Bendaña from the 15th-18th centuries and the Pazo do Concello from the 18th Century. Among the religious heritage highlights we can find the Church of Santiago  from the 15th century, that houses the Renaissance chapel of Don Pedro de Ben, the Church of San Francisco  from the 14th century, where the Pérez de Andrade "El Bueno" sarcophagus is located, the Church of  Santa María de Azougue and Convent of Santo Domingo from the 17th century.

The Pasatiempo Park, curious theme park built between 1893 and 1914 is another mandatory stop at this village. The Capela de Bruma, dating from the 16th century, is a modest stonework building located in an environment directly linked to Hospital de Bruma where this stage begins.

Already in the municipality of Ordes, we find the church of  San Paio de Buscás and the church of San Xiao de Ánimo, both Romanesque. Before entering the main village of the Municipality of Oroso, Sigüeiro, we will cross the Tambre river bridge with possible medieval origin, the scene of a historic event in Galicia: the uprising of Colonel Solís against government troops, who later became a so-called 'Carral Martyrs' after his defeat .

Already reaching our destination, we pass the Ponte Sionlla and Castro de Formarís.

Now in the city of Santiago de Compostela, before reaching the old town, we pass through the park where the Ponte Mantible is located, which is actually an aqueduct built at the orders of Archbishop Xelmírez in early eleventh century. 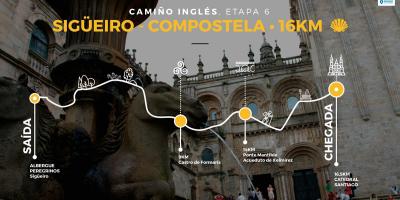 We depart at this stage from the city of the Tower of Hercules , the only Roman lighthouse from the 2nd Century, restored in the 18th century which today is still active; one of the most beautiful monuments and scenic environments of Galicia.

The Church of Santiago, between the 13th and the 15th century, founded by Alfonso IX and started by disciples of Mestre Mateo, the church Collegiate of Santa Maria del Campo , Romanesque, and Plaza de María Pita (1860-1912) are just some of the heritage to visit in a Coruña.

Balconies of Avenida de la Marina, the emblematic glassed buildings facing the sea, built between the 19th and the 20th century, give its personality to this Atlantic city.

And in the municipality of Cambre, the Romanesque churches of Santiago de Sigrás and the church of Santa María de Cambre are two monuments to visit.

The Capela de Bruma, dating from the 16th century, is a modest stonework building located in an environment directly linked to Hospital de Bruma. 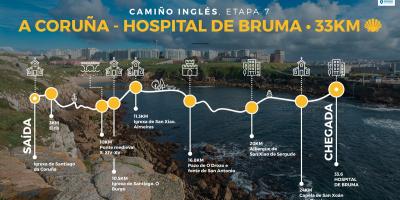